Forests are vulnerable to climate change

Forests around the world are, and will be, affected by an unprecedented combination of climate change, associated disturbances (e.g. drought, insects), and other drivers of change (e.g. land-use change) that collectively threaten to undermine ecosystem resilience. Understanding the diverse factors of forest ecosystem vulnerability is crucial to enhancing their resilience and designing effective adaptation strategies.

Forest ecosystems are exposed to different aspects of climate variability and change, as well as other drivers that may exacerbate related impacts. Their sensitivity refers to the degree to which forests will be affected by a change in climate, either positively or negatively, such as through changes in growth and productivity, species distribution, or disturbance regimes such as fires. Their vulnerability also depends on adaptive capacity — and many people are concerned that the innate capacity of forests to adapt to change will not be sufficient for them to adapt to the unprecedented rate of climatic change.

Aiding the adaptation of forests

There are two broad kinds of adaptation measures for forests: measures that aim to buffer forests from disturbances by increasing their resistance and resilience; and measures that facilitate ecosystem shift or evolution towards a new desired state that meets altered conditions.

Buffering measures can focus on preventing disturbances, such as fire (e.g. by managing fuel load) and invasive species (e.g. by preventing their spread or removing them). They can also include actively managing the forest actively after a disturbance (e.g. by assisting the establishment of adapted and acceptable species). 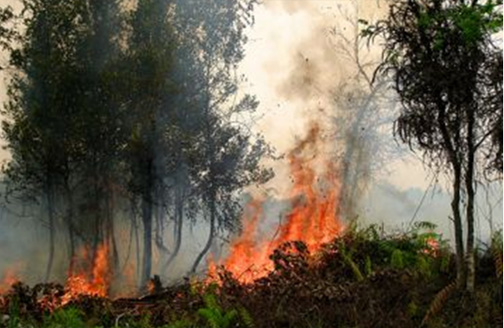 However, buffering measures may only be effective in the short term, becoming less and less effective as changes and pressures accelerate. Furthermore, there are often high costs associated with such measures because they require intensive management. They are most efficient when applied to high-value or high-priority conservation forests or to forests with a low sensitivity to climate change.

Measures that facilitate ecosystem shift or evolution do not aim to resist changes, but rather to ease and manage natural adaptation processes. Resilience is crucial, not necessarily to keep the ecosystem in the same state after a disturbance, but to help it evolve towards a state that is more acceptable to society. Examples of such measures include the reduction of fragmented landscapes, conserving genetic diversity and a large spectrum of forest types for their value and higher resilience, adopting species and genotypes that are adapted to future climates in forest plantations, planting mixed species in an uneven age structure, etc.

Strategies that reduce non-climatic pressures are critical and can contribute to both buffering and facilitating measures for adaptation. Climate change adds to other stressors, such as ecosystem degradation and conversion for other land uses, some of which are currently more pressing than climate change. If non-climatic threats are not addressed, adaptation to climate change becomes purely theoretical. In landscapes where threats to forest sustainability are mostly non-climatic, implementing forest conservation or sustainable forest management is an essential first step for reducing forest vulnerability before any adaptation measures can be implemented.

Sustainable forest management (SFM) can provide an effective framework for addressing forest adaptation in an integrated manner, by including social, economic, and environmental goals. Adaptation to climate change can be incorporated into the thematic areas of SFM through an adaptive and participatory management approach. Adaptive management will enable stakeholders to face the challenges of complexity and uncertainty.

Forest stakeholders have a central role to play in forest adaptation, both because they manage forests and depend directly on them, and because adaptation must be based on local practices and knowledge, as local people know their environment well. Institutional changes are needed to be able to include adaptation at the local level; for example, increasing local ownership and access to forests, and building institutional responsibility for adaptation.