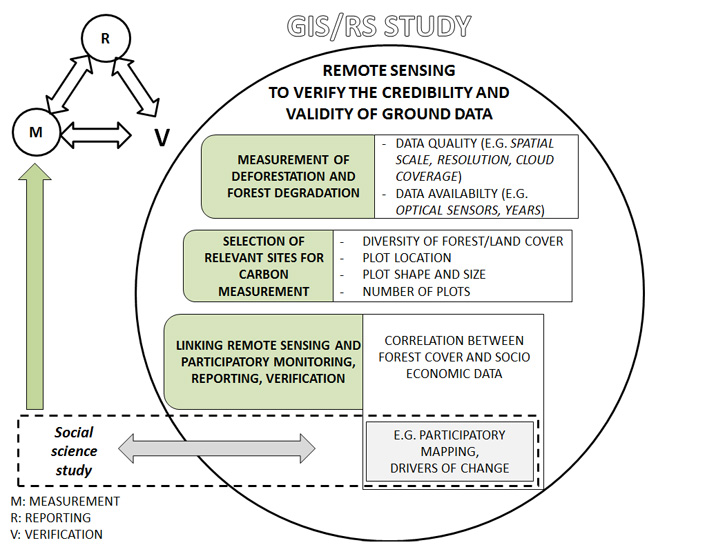 Recent studies show that tropical forests suffer more deforestation than other forested landscapes. This is mainly due to the conversion of forests to land used for agriculture, fuel and charcoal production, and mining. Technological advances in satellite sensors that provide images of global forest coverage have enabled the option to monitor forest-cover changes in a timely and consistent manner.

Prior to applying land-cover classification and analysis, satellite data was preprocessed to correct for atmospheric disturbance and terrain effects. We assessed the performance of parametric and non-parametric classification methods to detect local deforestation and forest degradation. Information obtained from local key stakeholders, through community based mapping, was combined with the ground check information to increase the accuracy of land-cover analysis.

What types of data are we using?

The third remote sensing data used in the research is RapidEye. It was purchased as a time series from the years 2010, 2011 and 2012. It has a spatial resolution of 5 m for multispectral bands.

The changes in vegetation cover seen in the time series data described were analyzed using information from spectral response to identify different stages of forest regeneration and disturbances. The arithmetic combinations from the several spectral bands were also used to detect deforestation and forest degradation. Several vegetation indices, which indicate forest photosynthesis and respiration, and common band ratios were used to measure forest degradation. The extent of degradation was measured as a decrease in the value of these vegetation indices.