Following the overall objective of the project to contribute to national processes of adaptation to climate change and streamlining adaptation into development through the assessment of vulnerability, there were five planned and achieved outcomes.

In Costa Rica, TroFCCA researchers focused on a vulnerable area within the Reventazón watershed, whose dams provide 27 per cent of Costa Rica’s hydro-power.

During recent years, the increasing frequency and intensity of extreme precipitation events has led to serious soil erosion, resulting in an increase in sedimentation which threatens the dams’ potential to generate power. Trying to counter this has cost the National Institute for Hydroelectricity, which has a state monopoly on energy supply, millions of dollars.

The research investigated what would happen if extreme precipitation events continued to increase; how different land-use options might help communities and the environment adapt to climate change; and the sort of incentives that could encourage farmers to adopt land-use practices which reduce erosion, and therefore sedimentation in the dams.

‘The project improved our knowledge about soil conservation and gave us a better understanding of how to improve soil management on agricultural land,’ says ICE engineer Gustavo Calvo Domingo. ‘We are now promoting activities which will be beneficial both to farmers and to the company.’

These activities will help reduce erosion and the costs associated with removing sediment from the dams. 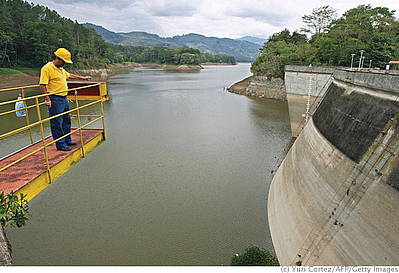 TroFCCA project results were cited in a successful proposal by Honduras to the Adaptation Fund on climate change risks for water resources, one of the first to be approved by the Fund. The US$5.6 million project will be implemented by the United Nations Development Programme and the Secretariat for Natural Resources and Environment in Honduras.

According to the Global Climate Risk Index 2010, Honduras has been hit harder by extreme weather events than almost any other country. Yet adaptation to climate change has not been mainstreamed into development actions and related policies. For this reason, the TroFCCA project emphasised improving institutional capacity to support local activities on climate change. In Honduras, this included training programmes for graduate students and scientists, project workshops, field days and policy dialogues with government officials.

Although the goal of the Adaptation Fund project Addressing Climate Change Risks on Water Resources in Honduras: Increased Systemic Resilience and Reduced Vulnerability of the Urban Poor is to decrease the threat of water shortages for the poor in Tegucigalpa, it pays significant attention to the role of forests, including how they capture mist from the atmosphere and the negative impacts of deforestation in water catchment areas. The project is currently being implemented.

Enhancing community understanding of ecosystem services and adaptation in Mali

In northern Mali, droughts and famines have occurred throughout history, and the local people are used to hardship. This may explain why they have adapted with some success to the changing climate over recent years. However, the political and administrative systems in the country lag behind, and have yet to adapt their planning and development policies to climate change. This is one of the findings of TroFCCA’s work in Mali.

Research efforts focused on how local communities were adapting to climate change in two villages to the north of Lake Faguibine, near Timbuktu. At one time, the local economies flourished: fish were plentiful and local people cultivated wheat and barley on the rich soil surrounding the lake. But in the 1970s and 1980s, droughts became more frequent, and rainfall less plentiful. Now, over a quarter of the area that was formerly under water is covered by an indigenous tree, Acacia, and an introduced species, Prosopis.

Research began by conducting a 10-day biophysical survey, during which the researchers explained to local people precisely what they hoped to achieve. The survey was followed by a series of workshops to establish how the villagers had adapted, or failed to adapt, to the changing climate and environment. 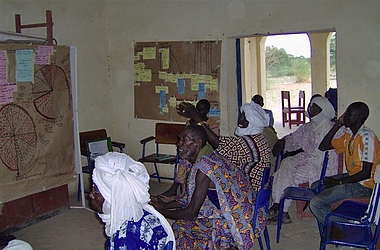 ‘At first,’ says CIFOR scientist Maria Brockhaus, ‘they were telling us what a nightmare the Prosopis forest was.’

Some complained that it was so dense they would lose their animals there — and possibly their lives. Others said that the species had taken over land once used for cultivation and fisheries. However, a dissenting view began to emerge. Some of the villagers pointed out that during the recent drought their animals had only been able to survive because of the fodder provided by Prosopis; others said that they had used the timber to make charcoal.

‘Then they began to laugh and assess what they’d been saying,’ says Brockhaus.

‘They realised they were always complaining about the Prosopis, but they had actually identified more benefits than disadvantages. What’s more, they had successfully adapted to the changing environment.’

The same could not be said for either local or central governments. Brockhaus and her colleague Houria Djoudi discovered that a planned development project, designed to cut new water channels around the fringes of Lake Faguibine, could have a profound influence on the environment, yet the plans at the time of research did not take into account the ways in which local people and the ecosystem had already adapted to climate change. There were no plans to manage the local resources sustainably; neither could the researchers identify any technical support from government bodies. In short, the adaptation efforts of the local population seemed to be entirely disconnected from higher-scale planning and decision making.

‘This is a good illustration of why it is so important to mainstream adaptation into national policy making,’ says Brockhaus.